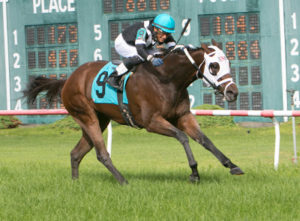 East Boston, MA — Live racing returned to Suffolk Downs on Saturday, August 4 as the track held the third weekend-long racing and food truck festival of the summer. A rain dampened crowd of 6,776 was on hand as Fiesta made every call a winning one in the $100,000 Jill Jellison Memorial Dash.

The four-year-old daughter of Speightstown broke alertly under jockey Luis Ocasio and controlled the pace. At the top of the stretch, she kicked clear to win by 2 ½ lengths and completed the distance of about five furlongs in :58.40. It was the fifth victory of her career and her first black type win. Trained by Joe Sharp and owned by Seajay Racing, LLC, Fiesta returned $13.40, 6.60 and 5.00. Orecchiette returned $5.00 and longshot Eye on Berlin paid $13.20.

Also on the card, the Massachusetts Thoroughbred breeding program was showcased in the opener with the $50,000 Massachusetts Stallion Stakes. Desert Wonder, a five-year-old son of Wild Desert, went gate to wire to win by 1 ¼ lengths as the favorite. The gelding is owned by Arlene Brown and was bred with her husband, the late George Brown, at their Briar Hill Farm in Rehoboth, Massachusetts. George Brown passed away in July.

“I am just sure that George was pushing for us,” said an emotional Arlene Brown in the winner’s circle. “He just would have been so happy.”

Also on the card, jockey Dylan Davis piloted home four winners and is sitting at the top of the standings for the third $5,000 Jockey Challenge in which the riders compete for points over the course of the weekend. Davis kicked off his four win day in the second race with Eighth Commandment ($5.60) and teamed up with Michael Stidham to win the fifth race with Fetching Fury ($3.40). He went on to win the seventh race with the Jonathan Thomas trained Escapade ($5.60) for Eclipse Thoroughbred Partners and capped off his day with Peppi the Hunter ($8.80 for Joseph Minieri). Davis won the Jockey Challenge in June and heads into Sunday’s card with 37 points, 9 ahead of Erik Barbaran in second.

“I am having an incredible day so far,” said Davis. “I am just taking it one race at a time but I love getting to come to Boston.”

Live racing is scheduled to continue on Sunday, August 5 with a card of twelve races including two stakes races for Massachusetts-bred horses. Post time is 12:55 p.m.